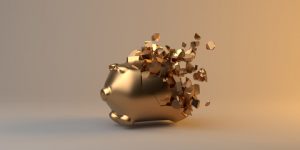 If you relocate to Germany to start a shiny new job and discover that your company can’t pay your wages, you’re bound to be pretty miffed. Luckily, there’s a bureaucratic process for that in Germany. Of course there is! Read on to find out what you have to do as an employee to make sure you see your missing paychecks.

The maximum amount of insolvency pay (Insolvenzgeld) you can receive from the job agency is three times your salary plus social contributions. The office responsible for paying you once company insolvency kicks in (more on that later) is the Agentur für Arbeit. The AfA also handles unemployment benefits, so get to know them and be friendly – there’s a chance you might have more to do with them later.

When does insolvency officially kick in?

If your company determines that it can no longer pay its debts, it must file a petition for insolvency without delay, and within 3 weeks of making the determination at the latest. Delaying insolvency is a breach of duties and can lead to criminal or financial consequences for the management.

There are certain circumstances that are considered “insolvency events” (Insolvenzereignisse). For example:

When can I claim money from the Agentur für Arbeit?

There are three prerequisites that have to exist before you, the employee, can apply for Insolvenzgeld with the Agentur für Arbeit.

There is one deadline to take seriously, though: you have up to two months to claim Insolvenzgeld once the insolvency event has occurred. If you apply later, you have to have a good reason for doing so.

How does payment work?

You get paid in one lump sum. The decisive time period for payment is the three months before the company either terminated your contract in writing or went insolvent, whichever happened first. There are a few different scenarios. Let’s say your company terminated your contract at the end of July and filed for insolvency 2 months later. The time period for which you’d receive Insolvenzgeld would be May-July. But sometimes, employees keep working without actually being aware that their company is insolvent. In which case, the time period is the three months before the date that the company gave the employee notice of insolvency. If you are confused, the best strategy is to fill out the form, give accurate information and let the AfA figure it out.

No, a payment of Insolvenzgeld after your contract has been terminated while also receiving ALGI has no effect on the length of your claim to ALGI. You can get them both at the same time.

How do I apply for Insolvenzgeld?

You fill in this form and include:

You can register online at the Agentur für Arbeit’s website and submit it all electronically. This works if you already have login details for the AfA too. You can send everything by post as well, though it might take longer to be processed.

If you want help filling out the form online, book an hour of Life Admin and we’d be happy to take you through it as you share your screen. 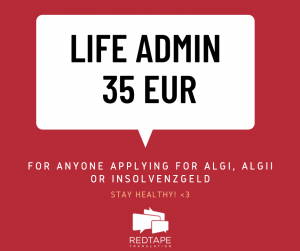