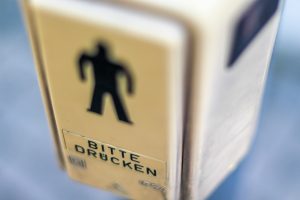 Red Tape Translation received an interesting question about booking appointments at the Ausländerbehörde (LABO), and we thought we’d throw it out there for discussion.

An American citizen was not able to get an appointment before his current permit expired. Those pesky appointment times go like hotcakes, and sometimes, there isn’t one available for 6-8 weeks.

Prima! “That’s a load off”, thought our American friend. But as he flicked through the official appointment calendar, he noticed that he could book an appointment for June 2014, thus extending his current permit for twelve whole months without a single nod of approval from the Ausländerbehörde. Could this actually be true? Doubtful, he visited Die Beauftragte für Integration und Migration, a place where foreigners can get advice about everything immigration and integration. On his first visit, the case worker there agreed that this was true. A second visit proved less helpful.

In the meanwhile, Red Tape Translation emailed LABO to see what the official word there was. Could the American really extend his current permit for twelve months just by booking an appointment? A Fiktionsbescheinigung (bridging visa) would have given him three months max. The email response from our contact at the Ausländerbehörde was unfortunately completely irrelevant to the question at hand.

Red Tape Translation then turned to a legal source, Andreas Moser, a German lawyer with a special interest in international and immigration law. Andreas explained that if it was possible to book and confirm an appointment through the LABO website, then our friend has done everything right. But, if LABO later notices an IT glitch or a loophole, they could always cancel his appointment and rebook it at an earlier date. Additionally, this twelve month extension might not prove extraordinarily useful. For example, the extension is not suitable for travel outside of Germany – he couldn’t explore Europe and hope to get back in to Germany. Also, a university or an employer might hesitate to accept his appointment booking confirmation as a valid permit, which could cause problems at work or school in Berlin. So aside from buying himself some time, he might just be prolonging the inevitable.

Update June 2014: When booking an appointment on the LABO website, they now request that you book the next available appointment. I recently accompanied someone who had booked an appointment a few months in advance (thinking they would wait until after Christmas to get it sorted out, even though there were appointments available in December) and they got an earful from the case worker!

About the Author: Kathleen Parker attends appointments at the Ausländerbehörde with English speakers who need a translator in person at the Auslanderbehorde. She can also be found at the Arbeitsagentur, Bürgeramt, Standesamt, and other meetings, and she offers German – English translations.