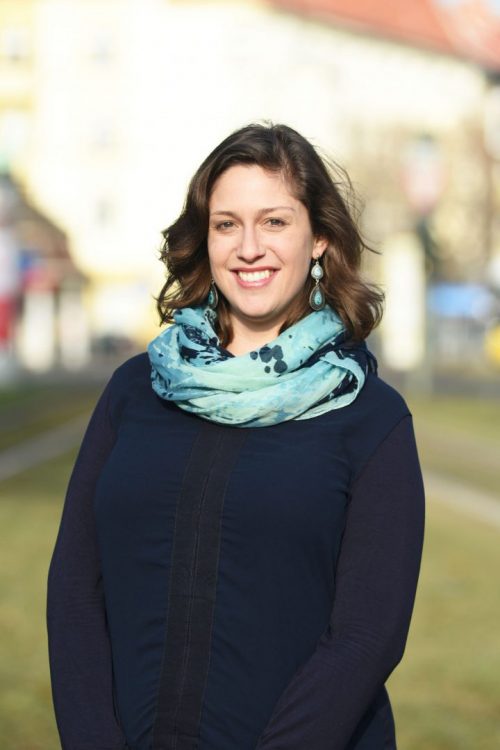 Kathleen Parker is a translator, interpreter and opera singer living in Berlin, married to Jörn with two daughters, Elise and Laura. She is a dual-citizen Australian/Canadian.

Kathleen Parker arrived in Germany from Queensland, Australia in 2009. She registered at several addresses in Berlin and Cologne, applied for five different types of work permits, did her tax returns, got married, had two babies, started a business and applied successfully for several German government grants. She helped her English-speaking friends fight with their German phone companies, sign their rental contracts, and deal with their insurance.

Out and about, Kathleen quickly noticed that everyone had a red tape horror story to share, and she saw plenty of English speakers feeling discouraged and frustrated by the lack of help available to them. Red Tape Translation was born.

Since starting Red Tape Translation, Kathleen Parker has built a reputation for herself as a reliable and knowledgeable interpreter and translator of German to English. In several Berlin offices, the case workers know her, trust her, and are relieved to have her there. Many in Berlin’s large English-speaking community now recognise Kathleen Parker as an expert in navigating German bureaucracy, through interpreting, translation, and general consulting.

All the same, Kathleen still wishes that Red Tape Translation had been around when she was just getting started in Germany.

How did you get to be fluent in German?

Training and working as an opera singer involves foreign languages, so I did a lot of work on my German in Australia. By the time I arrived in Germany, I already had a good grasp on the language. I got straight into the advanced language courses and I then met my German husband (we speak German at home). A few months later I started working full-time at a German theatre. What better way to dive into the deep end!

How Did You Get Red Tape Translation off the Ground?

When I was just starting out, I didn’t even know if I was allowed to do what I wanted to do. So, I went to the Ausländerbehörde, stood out the front and asked in a loud voice if anyone wanted an interpreter. I did it for free at first so that I could figure out the office’s internal systems. I served lots of very grateful clients, talked to the big bosses and learned a bunch. I then applied for a government grant, cobbled together a website, printed out some flyers and sat around waiting for the phone to ring. Naturally, I have learnt a lot and come a long way since then!

How Many People Make Up the Red Tape Team Now?

Red Tape Translation is mostly still just little old me, Kathleen Parker. I have two rock star admin assistants (Kim and Claire). My colleagues (Lucas, Martha, Nadine, Christian, Pippa, Monica, Suzanne, Michael and Maria) run around Berlin helping you when the workload gets too high for me to manage on my own, or when I’m away singing opera. Maximilian takes care of appointments in Munich. I also work together with certified translators (Anne, Pascale, Nadine, Helga, Eva, Sabrina, Davide, Emily, Britta and Jana) to get your birth and marriage certificates translated and certified.

It can be tough - I think the tax, pension and insurance systems in place in Germany aren’t always very friendly to freelancers, especially those starting out. Self-employment is much more expensive than people realise. My tip to freelancers? Take whatever you think you’d earn per hour if you were an employee in Germany and multiply it by 2.5 or 3, and then maybe you can survive as a freelancer long-term. Health insurance is a huge hassle because the decisions you make when you start your business can affect you for years afterwards! Having said that, the benefits of being a freelancer still outweigh the costs for me.

What’s your biggest pet peeve when dealing with German offices?

There are more positives than you’d think, actually, but there is one thing that always makes me cringe. It’s the use of the word ungern (unwillingly). If the lady at the post office says “Das mache ich aber ungern”, what she’s saying is “I’ll do it for you. But I really don’t want to!” This one word goes against all my ingrained values about service.

What do you love about living in Berlin?

The city is spacious, green and easy to get around. A beach or a forest is just a short train ride away. I love riding my bike through the cobbled streets in nice weather, and I love not having a car. I feel safe on the streets at any time of day or night. It’s such an easy city in which to have kids: there are wonderful parental benefits and support systems, childcare is MORE than affordable and the cultural and recreational offerings are endless. The international community is so vibrant here, it’s easy to find support groups and common interests. Perhaps best of all, in Berlin, you can be who you want, wear what you want, eat what you want and get enthusiastic about whatever you please. No-one will blink.

The on-site services we’re accustomed to offering at public offices around Germany have changed for the foreseeable future. Read on to find out what it looks like to take a translator to an appointment with you during the Corona pandemic.